Johannesburg, 23 November 2017: The winners at the 2017 Financial Mail AdFocus Awards were announced last night at an event held at The Empire Conference & Events venue in Parktown, Gauteng. 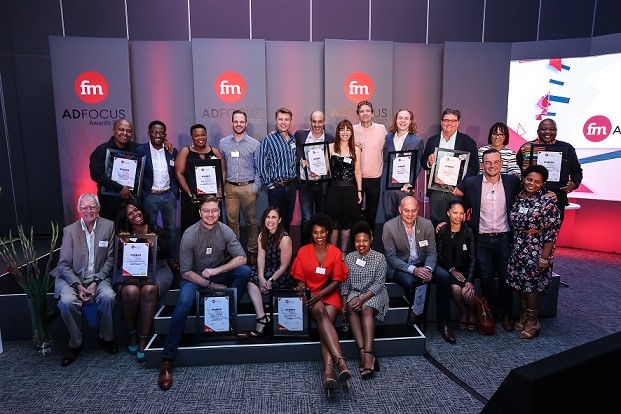 Since 1990, the Financial Mail AdFocus Awards have grown to become a much anticipated event for South African marketing and communications industry. Today, agencies and individuals are awarded not only for their creative and marketing skills, but for their all-round business acumen.

Twenty-one agencies were shortlisted across 6 categories in 2017. Agencies were adjudicated against four measures: New Business and Growth; Business Retention and Relationships; Training and Industry Recognition; and Empowerment/Social Responsibility.

Convened by Jeremy Maggs and David Furlonger - the co-editors of the annual Financial Mail AdFocus Magazine - a panel consisting of Jury Chairman Craig Page-Lee and other industry experts adjudicated each entry and applied their scores in secret. Finalist agencies in all categories made themselves available for a Q&A with the jurors, arising from their entries. The judging and scoring is audited by Deloitte. Jurors themselves do not know the identity of winners until the awards evening.

“The importance of digital, and specifically mobile has been a key thread throughout this year’s entries, with all agency categories demonstrating evidence of delivery in this regard, irrespective how successful the campaigns and submissions were. That said, there is still a way to go before we see agencies being able to deliver seamlessly through the coupling of these concepts and trends,” said Craig Page-Lee on the 2017 entries.

Furthermore, Page-Lee said, “the biggest highlight has been the introduction of the transformation award, which obviously solicited incredible conversation and signalled an important milestone for not only the Financial Mail AdFocus Awards programme, but for the industry as a whole.”

The Financial Mail AdFocus Magazine is SA’s largest brand communication review, and will be distributed with Financial Mail on 23 November 2017. The title’s co-editor, David Furlonger will be retiring from his responsibilities after many years’ hands-on involvement with the AdFocus Awards.

Phumi Mashigo will take the reins as the new Jury Chair in 2018. She is the founding Managing Director of Ignitive, a pre-eminent stakeholder management and communications company.

The MediaShop once again sponsored the WiFi at the AdFocus Awards event.